This follows the connection of the Croatan/Lumbee
and the Melungeons

These are 'eyewitnesses to history' - Hamilton McMillan, McDonald Furman, Dr. Gurley, C. A. Peterson, James Mooney and Swan Burnett, all with connections to the Smithsonian Institute as early as 1889, they interviewed people who were born early 1800s whose parents born in the late 1700s surely knew more about the history of these people than armchair researchers in the 1990s whose research is still being used to sell books, magazines, newspapers, and click bait, etc. 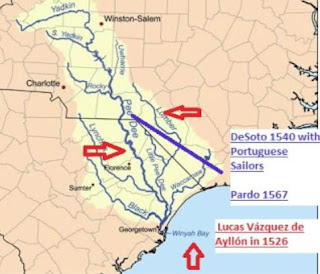 "His name Melungeons is a local designation for this small peculiar race.
Their own claim to be Portuguese is more generally known.
Their original site is on the Pedee river in South and North Carolina ."
Lawrence Johnson 1889 Holly Springs, Mississippi

In order to avoid the hostile Indians in what is now Western Georgia and Eastern Alabama, immigrants from the Carolinas traveled over land to the Holston River in East Tennessee, where they built family boats and descended the Holston and Tennessee Rivers, etc. Randall Gibson was then about fifteen years old, and I have heard him relate this fact in connection with an attack made on their boat by hostile Cherokee Indians.  [Randall Gibson was the son of Gideon Gibson of the Pee Dee River]


Excerpt from the 1871 North Carolina Joint Senate and House Committee as they interviewed Robeson County Judge Giles Leitch about the ‘free persons of color’ living within his county:


Leitch: Yes Sir; half of the colored population of Robeson County were never slaves at all…

Senate: What are they; are they Negroes?

THE KU KLUX REPORT ON THE LOWERYS
EXCERPT;

" I do not know what these mulattoes of Scuffletown are. I think they are a mixture of Spanish, Portuguese, and Indian; about half of them have straight black hair, and many of the characteristics of the Cherokee Indians in our State; then, as they amalgamate and mix, the hair becomes curly and kinky, and from that down to real woollen hair; I think they are mixed Portuguese, Spaniard and Indians; I mean to class the Spaniards and Portuguese as one class, and the Indians as another class; I do not think that in class of population there is much negro blood at all"

A. B. Beeson
Page 174
Q. were you well acquainted with Solomon Bolton, the grandfather of Martha, complainant in the Cross Bill, and, if so, state what race of people he was or appeared to be. Also give a description of his person and complexion and appearance.
A. I was. He was called a Malungeon. He was a small spare made man, with low, flat head, had a dark complexion, rather a flat nose, turned up at the end. He wore his hair short, and it was always inclined to curl or kink.
Q. In the neighborhood in which he lived did he associate with white men or free negroes as his equals?
A. His general association was with the Malungeons-his own people. I never saw him associate with whites except when he had business.
Q. How many different families in this County or adjoining Counties did you know of the same race or character of people -name them?
A. I don't now how many- several - but the Perkins- the Goins, Mornings, Shumakes, Menleys & others.

About the time of our Revolutionary war, a considerable body of these people crossed the Atlantic and settled on the coast of South Carolina, near the North Carolina line, and they lived among the people of Carolina for a number of years.  At length the people of Carolina began to suspect that they were mulattoes or free Negroes and denied them the privileges usually accorded to white people. They refused to associate with them on equal terms and would not allow them to send their children to school with white children, and would only admit them to join their churches on the footing of Negroes.

South Carolina had a law taxing free Negroes so much per capita, and a determined effort was made to collect this of them.  But it was shown in evidence on the trial of this case that they always successfully resisted the payment of this tax, as they proved that they were not Negroes.  Because of their treatment, they left South Carolina at an early day and wandered across the mountains to Hancock county, East Tennessee; in fact, the majority of the people of that country are “Melungeons,:” or allied to them in some way.  A few families of them drifted away from Hancock into the other counties of east Tennessee

The tribe once stretched from Cape Fear to Pee Dee and the Redbones of your section are a part of the tribe as are the "Melungeons" of East Tennessee. The French immigrants callled the half breeds Melange or Mixed and the term evidently has been changed to "Melungeons".


Dr. Swan Burnett's article was published in which he wrote that since his reading in February he had been in contact with Hamilton McMillan and now believed the origin of the Melungeons was the Drowning Creek - Pee Dee River area where the 'Croatan and Redbones' were found. Dr. Burnett mentions he will publish his findings at a later date but none have been found as yet. Dr. C. A. Petersen mentioned this work of Burnett's when he wrote; "Dr. Swan M. Burnett, a distinguished scholar and scientist- the husband, by the way, of Mrs. Francis Hodgson Burnett, the novelist has traced by family names the connection between the Melungeons and the Croatans.

Near a month ago an article appeared in The CONSTITUTION named Melungeons. I laid it aside in order to correspond with the writer, but the paper got destroyed and the name and address had not been noticed with care, and are forgotten. Excuse me then for addressing him through the same medium.