Poor Will Allen.  Over the years I have been vilified for defending, publishing, and even mentioning the work of Will Allen Dromgoole.  Swan Burnett kicked it off with his research into the Melungeons in February 1889, followed by Hamilton McMillan, James Mooney, McDonald Furman and others from the Bureau of Ethnology.

When Will Allen's first article on the Malungeons appeared in 1890 it set off a firestorm.


Hon. J. A. Cartwright, later circuit judge, wrote of a settlement in the Twenty-fourth district of Davidson County, as follows; "These people have black hair, dark brown complexion, are readily distinguishable from the mulatto, being evidently of different origin, and have distinct features, quite similar to those described by Will Allen.

In the American of Sept.7,    "Twenty-fourth district" insisted that the Malungeons were an admixture of the white, Indian, and Negro races. He protested against "coining a new name for these amalgamationists." (If the Malungeons had heard of this last word they would have thought a new word had been coined for them.) "Will Allen" need not have gone to East Tennessee to find these people, observed this correspondent. "They are here under the very dome of the capitol. We recognize them as mulattoes on account of the fusion of Negro blood in their veins. When the fusion is slight they set up a claim of superiority and call themselves Portegee, ....

Will Allen Comes Back at Her Critics in Gallant Style

To the Editor of the American.

Referring to the anonymous correspondence in Sunday's AMERICAN, I wish to say a word concerning the peculiar race of people occupying an isolated ridge in eastern Tennessee.  The writer seems to think  because he cannot see the Malungeons they cannot exist.  I take it he has never seen Jesus Christ, yet we are reliably informed that he did and does exist.  As to the coinage of the name, it is not mine, and in an article sent to THE AMERICAN last Friday, and which has not yet appeared, I made mention of this fact. They do not exist, however, "under the shadow of the capitol" in spite of the emphatic ignorance which 'pardon the slang' sits so crushingly down upon everybody else's opinion.

If the writer will take the cars to Chattanooga, Knoxville, Lone Mountain, then get a horse to Mulberry Gap, then Sneedville and sit on the courthouse step half an hour, he will soon discover whether or not the Malungeons are mulattos.  In case he should decide affirmatively I should advise him not to make the announcement until he is well out of Hancock county.  If, as he says, the Malungeons are mulattos it is a blot upon the name of Tennessee: a disgrace so black that morality would hide her face, and, leave the world forever, for these people have children of white settlers, fathers of white blood, and would silence forever the .... that dared call them mulattos.

I send with this a picture of one of them, Calloway Collins, who declares his father was a full-blooded Cherokee.  Calloway is an Indian if ever one lived on Tennessee soil.  The picture was drawn by Mr. Thos. M. Sharpe, of Nashville, and is exceedingly well done.  Calloway was a soldier belonging to the First Tennessee under Brownlow and Johnson, and today draws a pensioner for three bullet wounds.  His daughter Dorcas (one of Mr. Sharpe's drawings) speaks for herself.  The family group is from life.

We visited this family with John Tyler, the brother of Hon. H. S. Tyler of Sneedville.  I send the pictures along with this, and my anonymous critic can see them by calling at THE AMERICAN office.
The Malungeons need no defense from me.  They can speak for themselves and all Hancock county can speak for them.  I first saw the name in the New York World, and many old gentlemen of Hancock county have corroborated the existence of the people and the correctness of the name.  And the fact that one croaker rises to dispute their existence because he has not seen them does not in the least alter the fact of their existence.

I know nothing of the people referred to as living the the 'twenty-fourth district.  I had intended visiting Mr. Cartright and asking him something of them, but work and business have prevented.  And now since an anonymous critic has entered his 'protest' I presume I had best be quiet concerning them.  The people in East Tennessee,  however, I shall insist upon their existence and for them deny the mulatto theory.  They live alone, mixing with none, and asking little.  If my critic will go and see, or will kindly sign his name, I will be very glad for any information he can give concerning them.

Will Allen's work mentioned in US1890 Census Bureau Article

Report on Indians Taxed and Indians Not Taxed in the United States (except. Alaska) at the Eleventh Census: 1890. Washington, DC: US Census Printing Office
http://www.historical-melungeons.com/taxed.html
at November 30, 2017 1 comment:

From South Carolina 1526-To Eastern Tennessee 1800 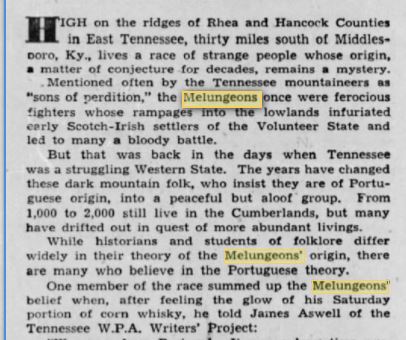 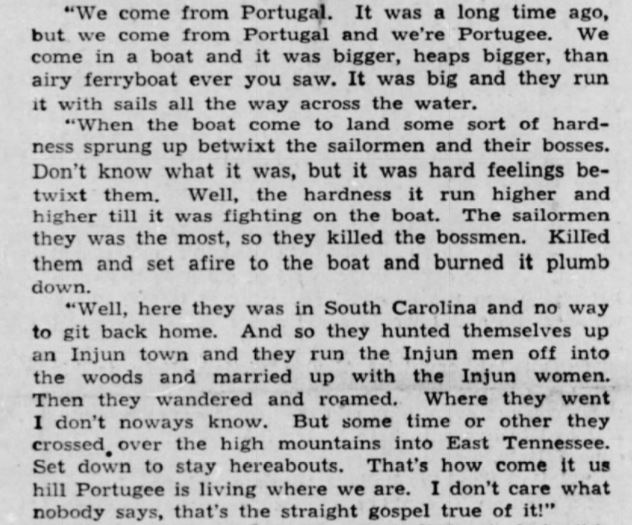 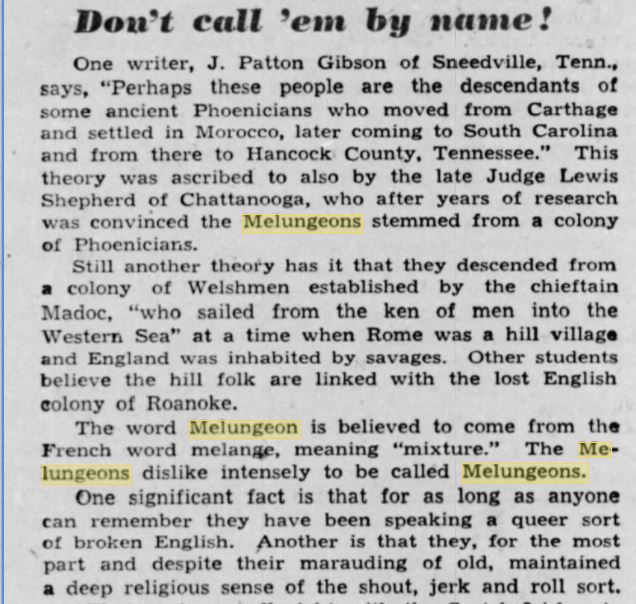 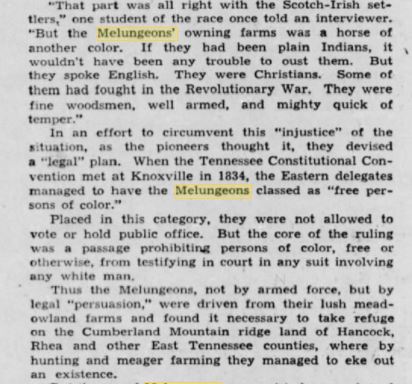 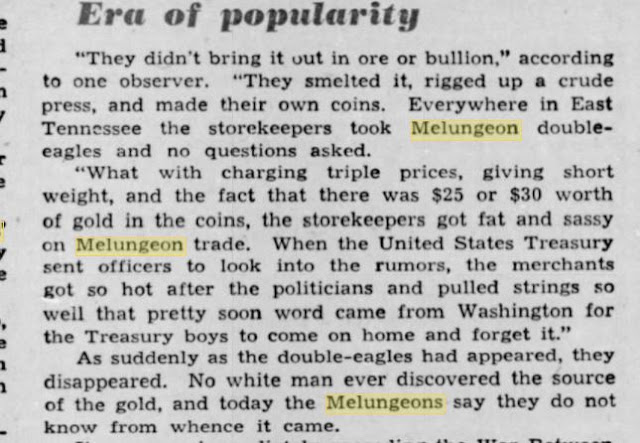 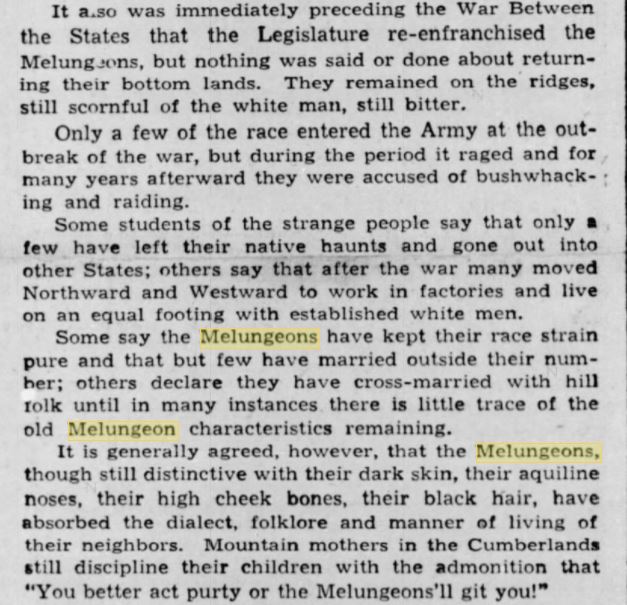 The Portuguese, DeSoto, The Indians & The Mixed Bloods