The Nashville American of  June 26, 1910  published a paper of about 10 pages in celebration of its 98th anniversary. One of these pages contained articles and photos of the "Mysterious Melungeons" with articles from Judge Lewis Shepherd and Lucy C.V. King,
early authors of the Melungeons.

This article by R.O Amer appeared along with Shepherd and
Kings and discusses other "Mysterious People of the Ozarks'
as well as other groups in Tennessee. 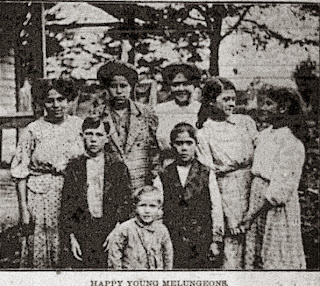 STRANGE FOLKS OF THE OZARKS

Are They Also Part of the Mysterious Early

"It would appear that the Melungeons really arouse more attention among students of ethnology in other parts of the country than among the people immediately surrounding them.

It is no unusual experience for a visitor from Tennessee in Boston to have many questions asked concerning this strange, mysterious people. And as a rule, the visitor from Tennessee is force to express a large degree of ignorance. This writing is not the result of personal investigation among the Melungeons themselves -- merely the outcome of reading practically everything obtainable on the subject and many interviews with persons living in the sections of mountain country more or less inhabited by these people.

Among the comparatively few instructive articles on the subject, the writings of Miss Will Allen Dromgoole of Nashville, have been given careful study.  That well known writer presents a very different picture of the characteristics of the Melungeons from that given by most persons who have come in contact with them and by other writers.  She makes them appear, practically, a set of brigands, too cowardly to engage in brigandage.  Other investigators represent them as a peaceful, long-suffering, patient people - not disposed in any greater degree than the whites by whom they are surrounded to be lawbreakers.

Possibly an explanation of these differences in description may be found in the supposition  that the Melungeons may differ widely in different localities.  The section of country visited by Miss Dromgoole does not contain, by any means, all the Melungeons.  And, while she may have found them the lawless set of rascals she describes, it is a fact that in other places they are represented to be exactly the reverse.

A considerable colony of these Melungeons exists in the neighborhood of Graysville.  There, as elsewhere, they are more frequently known by some family name than by that given to them as a people.  Around Graysville most of them are known as "Noels." there the members of the "Noel" family predominate.  For untold years they have married and intermarried, replenishing the earth with new Noels - until, as stated, they have come to be known by their family name better than by that given to their race.

In and around Graysville these "Noels" have the reputation of being very peaceable, very ignorant, and very little concerned with the affairs of the outside world. In no case does there appear to be any romance about these people.  The most careful and even most imaginative investigators and writers have found themselves unable to associate anything of the hero type with the Melungeon character.

Some of the young girls are described as beautiful specimens of physical womanhood.  But the men are, are anything but beautiful. And the girls, when older grown, develop late features who would not be prize-winners in beauty contests.

It is interesting in this connection, to note that occasional travelers in some sections of the Ozark Mountains have given descriptions of a mysterious people there.  These descriptions are by no means specific in detail. The "strange people of the Ozarks" are mentioned merely as a sort of curiosity in the human race.  So far as is known they never venture far from their mountain fastness; seldom, if ever, go down among the abiding places of the white man.  They are represented as having a sort of language of their own which some have imagined might be a conglomeration of Portuguese or Spanish with some Indian dialect and suggestions of origin in the English language.

These Ozark habitues, like the Melungeons, are represented as being uneducated, and having no special  manifested fondness for or devotion to any form of religion. They live, or exist, on the fruits of the soil, contented, seemingly, with the bare necessities of life.  So far as any information on the subject has been given, they do not call upon physicians from the outside world, are described as seldom ill, and living to an old age.

Now, the writer makes no pretense of any scientific investigation in relation to either of these people.  Most of his information comes from hearsay and from reading.  At the same time, the thought has suggested itself that there may be some relationship, dating from a remote past between these respective tribes of mountain dwellers.

One of the most able and interesting contributions to the speculations concerning the Melungeons is a ___ ___ article from the pen of Judge Lewis Shepherd, of Chattanooga, published int he Times of that city several years ago. Judge Shepherd sets up the theory, and to his own satisfaction substantiates it, that the Melungeons are descendants of the Phoenicians. He may be right.  It is not the province of the mere observing and speculating mind to take issue with this learned Judge.

At the same time, it may be that the Chattanooga writer, or some other equally earnest and learned investigator some time may trace the Ozark Mountain refugees to a similar origin.  It does not appear that any origin of the Melungeons or of the Ozark queer folks will be of any special value in calculating the result of earliest immigration upon the present development of the people and
institutions of the country.

The Melungeons, from all accounts, appear to hold their own in point of numbers.  Probably the same is true concerning the Ozark tribe.  But nothing of what is seen of their present can have any special influence or bearing on the destiny of the nation or the fortunes of those directly surrounding them.

Note in this map below of the sub regions of the Ozarks is the town of West Plains in Howell County, Missouri. There are a number of families living here that while not 'called Melungeons' are related to, or at least from the same geographical area, as the Melungeons in Tennessee.

David Collins whose DNA matches that of the 'Head and Source" of the Melungeons, Vardy Collins, and probably his first cousin,
had descendants who settled in West Plains.

The Caulders who name appears on this  1794 South Carolina petition with the
Melungeon families of Shoemake, Perkins, and Boltons,  also settled in West Plains.
The Caulders first settled in Arkansas in the Ozark Mountain county, called "Izard"
at the time, with the Turner families after leaving South Carolina.

Thomas Hall, whose ancestors were Portuguese,  obtained from the Maury County court a "Proof of Race" affidavit which was filed in Arkansas as well as Missouri. His descendants also settled in West Plains and used this "Proof of Race" to win their case in several courts. Peter Caulder married into this Hall family in Arkansas and the families then settled in West Plains. 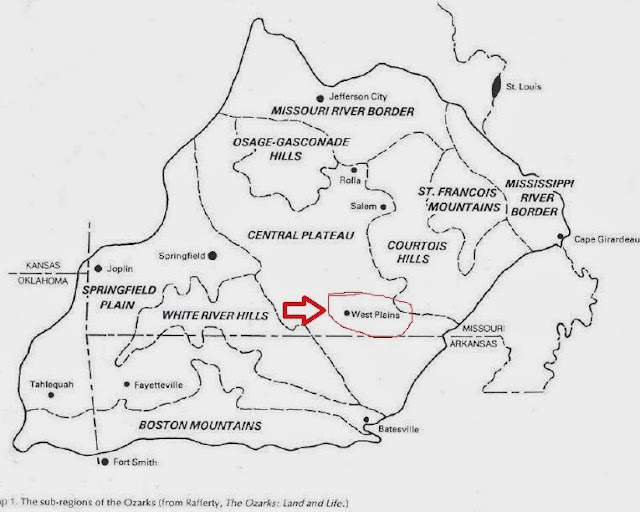