There are dozens of references to the Molungeons in the newspapers in
Virginia [particularly in Staunton] as early as 1856 into the 1900s.

Yet in 2014 I contacted the Library of Virginia Reference Desk and spoke to William C. Luebke, Reference Librarian, about the Molungeons.  He had never heard of them but said he would do a search, he found nothing, none of his colleagues had heard of the term either.  Nothing has been recorded of this group of people found throughout the newspapers.


Who Are These Molungeons of Virginia

Shortly after the birth of the Republican Party a Convention was held in Philadelphia.  It was a very important time in the history of our country. To read more on this see Republican Platform of 1856

--- The platform of Feb 1856 which expunged and ignored the 12th section and in a letter which goes expressly for restoring the Missouri Compromise. The Mulungeons of Richmond endorsed the 'late convention' at Philadelphia too; but will any southern man-- a Stuart or an Imobdin even -- endorse this letter for the restoration of the Missouri Compromise.''


These Articles listed below mention the Molungeons of Virginia.  Can there be any difference in the Melungeons of North Carolina or Tennessee?

Under UNCONSTITUTIONAL CONVENTION in the
STAUNTON SPECTATOR dated February 25, 1868 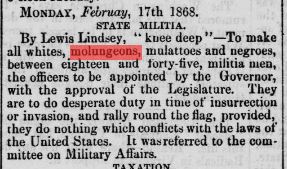 That is the State of Virginia recognizing these Molungeons as neither white, mulatto or negro but in a class of their own.

......when the Sheriff came to count up the votes at the close of the polls, they counted but five -- and if I had received the vote of one ''Molungeon,'' and he had been authorized by the Constitution to vote, and had 'had' a majority of only one--- it would have been difficult to tell, whether I was most indebted for my election to the "Molungeon" or to the Chief Justice of the U.S.; and if my competitor had received six "Molungeon" votes, or the votes of six worthless and degraded locofocos (supposing they could be any such) they would have more than balanced these five of the first men of the State could boast...........

Thirteen congressional electors, fifty senatorial electors, and three hundred and sixty county electors have been notified to hold themselves in readiness to repel the Dragoon of Rockbridge. Botts too, will dash to the rescue at the head of a noble band of "Molungeons and Eboshins" as soon as the weather becomes sufficiently warm to render his odoriferous forces efficient.

The Slave Power; its Character, Career, and Probable Designs. By JE...

"Whether their own children were sold may be imagined from an anecdote long current in Virginia, relative to ex-Governor Wise, who, in a certain law case where he was opposed by a Northern trader, decided of a certain slave, that the chattel, being a mulatto, was of more value than 'a molungeon.' And what, in the name of God, is a molungeon?' inquired the astonished 'Northern man." 'A mulatto' replied Wise, ' is the child of a female house-servant by 'young master' --a molungeon is the offspring of a field hand by a Yankee peddler."

Mr. Cairnes has, no doubt, not often heard of mulattoes--they constitute the great majority of Virginia slaves. But did he ever hear of a 'molungeon'?

From Our Own Correspondent Fredericksburg,
January 10, 1864
"the "Government organ," however, announces that the observed of all observers were four negroes, "of genteel exteriour, and with the manners "of gentlemen, who joined in the throng that 'crowded the Executive Mansion, and were coridaly received by the President of the United State,'' The Molungeon Chronicle adds; -- We are not aware that anybody was hurt on the occasion, and we rejoice that we have a President who is a democrat in fact, as well as by nature."

Utica Weekly Herald [New York]
March 29, 1864
The "Richmond Whig" makes the following comments on the last call for men.
It is certain, therefore, that the "rebels" will now back down.  Twenty millions of mongrels have undertaken to whip them.  The Yankees soon got sick of the fight, and levied on the Dutch and Irish. The resident Irish and Dutch began to flag and 75,000 Paddies were recruited in Ireland, with the approval and assistance of Earl Russel.  Then 100,000 n****** were enlisted.  And now 200,000 n******, Yankees, and other molungeons, half breeds, mestizoes, and Yaboes [Yaboes—a Davis coinage for the 70,000 Yank hoboes in the armed services] are to be drafted.  What wonder that the "rebels" are completely broken hearted?  Who blames the European by-standers for advising the "rebels" to give the cause up?
For ourselves, we are free to say that we are for peace.  We want peace. We will have it.  We must have it, on any terms?  Yes, on any terms -- which General Lee, standing in Faneuil HHall, may choose to dictate to the base born wretches who have sought to enslave us.  The game is a very pretty one as it stands.  Our enemies must be conquered by us, or conquered by Lincoln. They must make terms with gentlemen or they must make terms with a blackguard and a baboon.  Take your choice, O Yankees.


Summary: Declared that all eligible voters have the duty to vote on election day to ensure the defeat of certain sections of the Underwood constitution and to elect Walker as Governor. Wanted to ensure at least some form of control for white Virginians in the state.
Full Text of Article:The election which will take place on the 6th day of July next, by appointment of the President, will decide whether the people of this State are to be cursed with the Underwood abomination, called a Constitution, as it came from the hands of the Molungeon Convention, or whether it will be modified by having the test-oath and disfranchising clauses stricken out -- whether Walker or Wells will be our Governor, and whether proper men will be elected to represent the State in the Legislature.

December 1864
-- Murfreesboro, Tennessee
Battles and Sketches of the Army of Tennessee - Page 511
It soon became noised that these men were to be shot as bushwhackers General Forest informed General Rousseau, by flag of truce, that those men were his regular soldiers, and that if he shot them it would be at his peril.
The names of his soldiers were sent in, but the scout and Bose Rouss (some called him Malungeon), who had killed a Federal detective, were not mentioned in the list.
-Thursday 2d July 1863
--Bluegrass Confederate: The Headquarters Diary of Edward O. Guerrant By Edward O. Guerrant

Came on to Mr Hortons for dinner—found him in a tornado furiosus-against Virginians, who fed his grass &c. and in ecstatic panegyrics of all Kentuckians—”all of whom were “interesting” gentlemen”—& no “malungens”. ...

On July 8, 1864 under WAR NEWS the DAILY SOUTH CAROLINIAN  writing on the battle that had taken place at Sapponi Church and Reams Station said;
"The poor negroes was the most notable feature of this great capture.  They comprised every conceivable class of the race, and as the vast throng crowded to the office of Provost Marshall Hawes yesterday afternoon, marching in open and rather promiscous order, they occupied nearly the whole of Bank Street. We notice among them the old and the young; the robust and the infirm; the quick footed and the halt; the bright mulatto clad in tawdry finery, and the ebo-shin and the "molungeon," dressed in homespun"  -----  (The quotes are in the original clipping and are not mine jp)
The question is how did this man writing in the South Carolina paper determine they were ''molungeons'' caputured that day -- and how did he determine the difference between the ''molungeon'' and the bright mulatto?  Was it the difference in their clothing -- skin color -- facial features or what?  Were these Virginia Molungeons different from the Tennessee Melungeons?  Or were they kin?

THE EMASSEEES AND MALUNJINSOne tribe of Indians and a community of mixed breed Indians were unmolested bythe whites. These were the Uchees or Emassees, kinsman of the Seminoles orCreeks, who lived at the mouth of the Emassee or O'Mussee or Mercer creek nearColumbia, and the Malunjins, a mixed breed community residing some three to sixmiles northeast of Dothan toward Webb even as late as 1865. Where the Malunjinscame from nobody knows; where they were dispersed to is the limbo of forgottenmen. B. P. Poyner, Sr., father of Houston County Probate Judge, S.P.Poyner, wasborn in the Malunjins' community. Some of these mixed breed Indians brought milk to Mr. Poyner's mother while he was an infant. The Emassees were allied byaffinity with the Creeks and Seminoles yet during all of Alabama's territorialand state days were friendly to the whites. Only a squatter white family settledhere and there and lived in old Henry County prior to 1817. Save for thesesquatters there were no  white settlers in Henry County at the time of the Creek War of 1812-13. The Alabama Lawyer: Official Organ State Bar of AlabamaBy Alabama State BarPublished by The Bar, 1942