THEY SAID THEY WERE PORTUGUESE

"The legend of their history, which they carefully preserve, is this. A great many years ago, these mountains were settled by a society of Portuguese Adventurers, men and women--who came from the long-shore parts of Virginia, that they might be freed from the restraints and drawbacks imposed on them by any form of government. These people made themselves friendly with the Indians and freed, as they were from every kind of social government, they uprooted all conventional forms of society and lived in a delightful Utopia of their own creation.....These intermixed with the Indians, and subsequently their descendants (after the advances of the whites into this part of the state) with the negros and the whites, thus forming the present race of Melungens.

And so it went for the next hundred years, anyone who came and asked were told "they were Portuguese Indians." In 1918 Joseph G. Rhea, wrote to his niece, Martha Collins;

"Now about the Collins boys, I knew when I was a boy Navarrh, or as he was called, "Vardy" Collins was a fine old patriarch, said to be of Portuguese Nationality coming to this country with De Soto - he settled on Black water Creek and owned Vardy Mineral Spring-I  was at his home often with other boys, his grandsons...."


Were the Portuguese with deSoto? Yes, one entire ship was given to the Portuguese sailors. Did they mix with the Indians?  Yes.  Every town they went to they 'chose a number of Native ladies to accompany them' and I'm sure it wasn't just to cook and clean for them. These Native  women who accompanied the Portuguese and the Spanish, Genoans, slaves, etc., in 1540 bore sons with European DNA and yet with this knowledge today we have 'studies' showing DNA PROVES they were Jewish, DNA that PROVES they were from the Middle East and the latest DNA study that PROVES they were African men who mated with English women, and they can't possibly be Indians because they don't have the Native DNA.  This last study I know personally the researchers had knowledge of this pre-contact  It isn't a maybe, might have been or a theory.  It is a fact the Portuguese were here in 1540 with deSoto and mixed with the Indians.

FROM THE DESOTO JOURNALS

Here we are a hundred years after Vardy Collins told the journalist the "Legend of the Melungeons" and the "Melungeons remain a Tennessee Mystery"  -- why -- because they cannot possibly be Portuguese? In another twenty plus years it will be  two hundred years that any researcher, amateur or professional, WILL find there has never been a mystery ---  It was told in the journal of "A Gentleman of Elvas," a Portuguese officer with Hernando de Soto, wrote about DeSoto's Expedition in 1557 found here 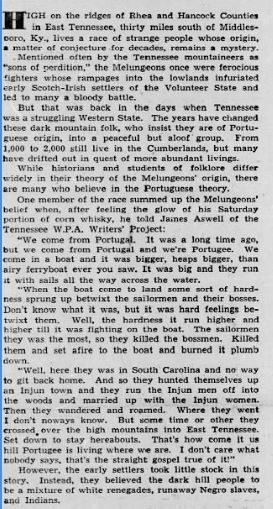 This map shows the town of Ylasi/Ilapi on the Pee Dee River, it was visited by the people who came with deAyllon in 1526, deSoto in 1540 and Pardo in 1570. The Pee Dee river, the home of the Melungeons.  Won't you help spread the word, the mystery has been solved! 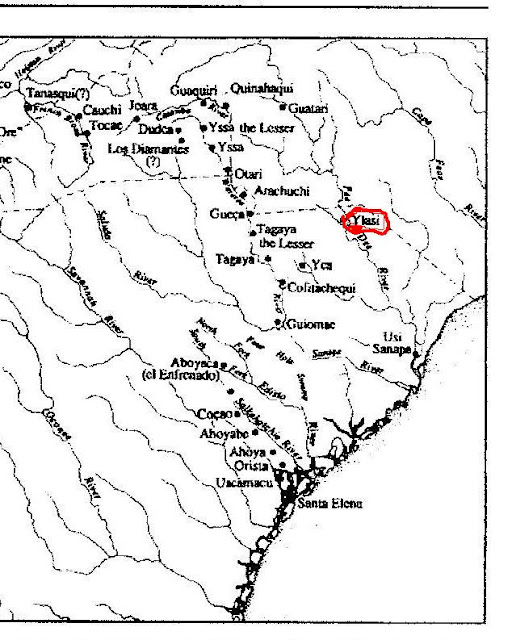 ( The Forgotten Centuries - Charles Hudson) "At Aracuchi, Pardo decided to divide his force, sending half on to Cofitachequi, while the other half traveled to Ylasi.  Ylasi is clearly the same town as deSoto's Ilapi."