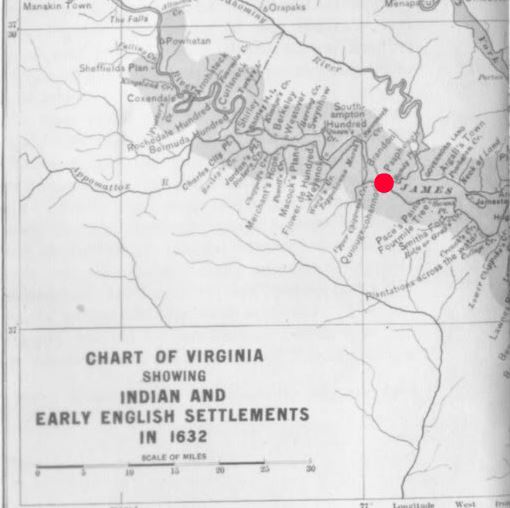 The records below will show that George Gibson, Thomas Gibson, Thomas Chivers/Chavis, 'Peter' Gibson, Thomas Busby, John Collins, Robert Sweat and Adam and Gilbert Ivey are all found on Chippoakes Creek. Thomas Busby was Indian Interpreter for the Crown [In 1712 “Gilbert Ivy and Adam Ivy being brought before this Board and examined on Suspition of trading with the Tuscaruro Indians contrary to the orders and proclamation prohibiting that Trade,” [sons of Adam and Elizabeth Ivey] and at least one Ivey has DNA results that match the Busby. The Busby, Gibson, Collins, Caufields and Ivey were neighbors on Chippoakes Creek.

Indians on the Upper Chippokes Creek:

Claremont Manor is in Surry County, Virginia, on the south shore of James River at its confluence with Upper Chippokes Creek. It was in the area occupied by the Quiyoughcohannock Indians when George Harrison received a grant of land there is 1621.

A List of ye Tythables from ye Colledge to Smiths forte taken ye 10th of June 1668 by Mr. Thos. Warren:


Elizabeth Chavis on 28 March 1672 made a successful petition to the General Court of Virginia to release her son, Gibson Gibson, who had been unlawfully bound by Berr. Mercer to Thomas Barber who had gone to England leaving the boy with Samuel Austin [McIlwaine, Minutes of the Council, 302-3].  While it has been published to somehow show the Gibson and Chavis must have been of African descent by Paul Heinegg I suspect Mr., Heinegg was not aware of this law on the book, or chose to ignore it.

In 1655 provision was made that Indian children could become indentured servants only by consent of their parents and for specified terms agreed upon and such children were to be educated in the Christian religion.

In Virginia, 1656, it was provided that Indian children brought into the colony as hostages should be assigned to masters by choice of their parents, but should not be made slaves. Again, in 1658, it was decreed that any Indian children disposed of by their parents to a white man for “education and instruction in the Christian religion”, or for any other purpose, were not to be turned over to any other person upon any pretext whatever

It certainly appears that Gibson Gibson would fall under this law when he was turned over to Samuel Austin, the recent find of "Indian Jane Gibson" court documents show the Gibson in Charles City County were known as Indians as early as 1640.

Edmund Howell -- 23 Dec. 1679
To my only son, William Howell my whole estate with some exceptions. to my godson Gibson, son of Thomas Gibson To godson Henry Baker. Makes George Foster Exec. and gives him the care of son until he is 21 years old, If son die, his inheritance to Henry Baker, GeorgeFoster Thomas Ironmonger his children.
Wit: Thos Pittan, Sr., John Moring. Prob. 9 Oct. 1679.(2:240)


Will of Gibby Gibson of Charles City Co. , "very weak'.

My riding horse to be sold to pay Col. Lightfoot.
To Hannah Dennam, my negro boy Jack, for life, and then to my son Gibby Gibson.

To wife Francis: my negro girl Vicky, for life, and then to my daughter Fran: Smith ( Francis would later marry and move from Bertie County with second husband William Chavis and is found on the lands of William Eaton - Saponi? in 1754)

To my son in law George Smith, 2 negroes - Sovilaty and Jin.
To Hannah Dennam, my negro boy Peter for life and then to my daughter Fran Smith

To my son Edward Gibson, my negro Judey, my wearing clothes, carpenters tools, and coopers tools

To George Smith, 2 sheets, 2 blankets and a rugg

George Smith to take care of my cattle and they are to be divided equally between my wife and granddaughter Sarah Smith.

To wife my two working Horses and hoggs.
Rest of my estate to George Smith and he to be executor , Dated 2 March 1726/7
Witt: Benja. Moody, Robert Cade,(*) James Blankes
Signed: Gibby(G) Gibson
Codicil: Negro boy Peter given in will to Hannah Dennam and then to Frances Smith, is to go to my son George Gibson
3 March 1726/27 Wit: by above Moody and Cade
Recorded 3 May 1727 Presented by George Smith and proved by above Blanks and Cade. Col. Fran's Lightfoot, Security.

After Gibby died some of the family started leaving Virginia. Frances who had married George Smith and later William Chavis, Tabitha who married George Rollinson, John Gibson and Gideon Gibson are in Bertie County, Hubbard Gibson and his family also moved to Bertie County before they all seemed to have moved on. Some in Granville and Orange Co., N.C and others to the Pee Dee.
November 1741 the court presented George Gibson and George Gibson, Jr., for not going to church. In July 1745 Phillis Goeing (Gowen) petitioned him concerning her children, but he failed to answer the petition so the court ordered the churchwardens to bind them out. (It is likely this George Gibson Sr., is the son of Gibby Gibson who left the 1727 will in Charles City County.


(*) Robert Cade was the witness on will of Gibby Gibson 1727 in Charles City County, Virginia. This is likely Robert Cade who married Susannah Crump, son Stephen Crump Cade born September 17, 1715 St Peters Parish, New Kent County, Virginia. Stephen Crump Cade resided in lived in Edgecombe, Dobbs, and was Sheriff of Johnston Co. in 1757, married to Mary Wadill and Mary Gibson and died in Robeson Co., North Carolina in 1783. His son John Cade married to Elizabeth Adair, daughter of the Indian trader and author Doctor James Adair of Robeson County, North Carolina. Elizabeth's sister, Agnes married to John Gibson who is said to have been killed by Indians near Nashville in 1790.

The Gibsons of Louisa County, later called Melungeons, and the Gibsons of Pee Dee share a common ancestor proven by DNA match.


Thomas Chivers was appointed to a jury of twelve men in Isle of Wight County on 28 July 1658 to determine whether 900 acres belonged to Major Nicholas Hill or to John Snollock [VMHB V:406]. He purchased 1,100 acres of land at the head of Sunken Marsh near Chipoakes Creek in Surry County, Virginia, on 20 May 1659 for two cows, payment of 4,000 pounds of tobacco in October that year, and payment of 4,000 pounds of tobacco in October 1660. He died sometime before 13 April 1664 when his daughter Elizabeth was bound out until she came of age [DW 1:151; Haun, Surry County Court Records, I:149; II:232].

Thomas CheversChavis purchased 1,100 acres of land at the head of Sunken Marsh near Chippoakes in Surry Co. Virginia - 1659  These Chavis descendants also went to Bertie Co., NC and then to Granville where they were apparently one of the 15 Saponi Indians living on William Eaton's land.
CHEVERS/SHIVERS FAMILY - CHRONICLES AND CONNECTIONS - By Thom Montgomery, PhD

Adam Ivey was a small-scale tenant farmer, almost certainly growing tobacco. Fifty acres was a small landholding, but a single field worker was capable of managing only three or four acres of tobacco in those days. Fifty acres was a typical holding for a planter with only himself to work the fields.[5] His location can be approximated, since nearly all the persons mentioned in these records lived south of the James River in the neck of land bounded by Upper Chippoakes Creek and Wards Creek. This neck included what was later the parish of Martins Brandon, in which Adam Ivey apparently lived at his death, in what would later become Prince George County. It was quite close to Surry County, Upper Chippoakes Creek being the later boundary between Prince George and Surry.

History of the Adam Ivey Family


The DNA evidence shows that the Ivys, Iveys and Ivies are related to the Busbices/Busbys/Buzbees in the male line. The Ivy male line's "Busby" DNA could have resulted from an Ivy adoption of a male Buzbee, or a Busby male could have been the father of a male Ivy. Ivey and Busby

“After seeing the latest Y-DNA results, it appears that it's highly probable that the Benjamin Busby line and one of the Ivey/Ivie/Ivy lines are entangled, most likely in very early Colonial Virginia. One of the Busby/Busbice/Buzbee male descendants is matching 66/67 markers with what we believe to be the Adam Ivie line of Charles City/Prince George Co, VA" - Jerry Ivey - Here


Thomas Busby (born about 1674) was an “Indyan boy” servant to Mr. Robert Caufield of Surry Co. VA in July of 1684 when his age was adjudged at 10 years (Haun, Surry County Records 1682-91, 444) - This Thomas Busby is likely named after Thomas Busby the interpreter for the crown mentioned in records of George Gibson in 1666. Could this Thomas Busby "Indyan boy" be the Ivey DNA match?

This may refer to the land granted to Thomas Ivey the following year. Thus, this may be the first sighting of the Thomas Ivey who was in Bladen County later this year. The name on the warrant at the Archives is very difficult to read and may be “Ive” or “Ivi” or “Ives” or something else entirely.

17 October 1640: James City Court: "Whereas Robert Sweat hath begotten with child a negro woman servant (not slave) belonging unto Lieutenant Sheppard, the court hath therefore ordered that the said negro woman shall be whipt at the whipping post and the said Sweat shall tomorrow in the forenoon do public penance for his offence at James City church in the time of divine service according to the laws of England in that case provided." [Virginia Council and General Court Records 1640-1641, in "Virginia Magazine of History" Vol. II, p. 281] This was a general law against fornication that applied to all members of the colony.

1754 Governor Dobbs requested reports from the militia commanders of North Carolina’s counties. The Bladen militia submitted the following: “Col. Rutherford’s Regimt. of Foot in Bladen County 441, a Troop of horse 36... Drowning Creek on the Head of Little Peedee, 50 families, a mixt Crew, a lawless People, filleth the Lands without patent or paying quit rents. Shot a surveyor for coming to view vacant lands being inclosed in great swamps. Quakers to attend musters or pay as in the Northern Counties. Fines not high enough to oblige the militia to attend musters. No arms stores or Indians in the county.” [Colonial Records of North Carolina, Vol. V, p161

Robert Sweat was granted 100 acres on Wilkerson Swamp near the Little Pee Dee River on 23 Dec 1754. This land adjoined the land of Joshua Perkins and was sold toPhillip Chavis.

Gilbert Sweat Case…21 Aug. 1829…St. Landry’s Parish LA… Testimony of Joshua Perkins – Gilbert Sweat was born about 1756 in what was then Marion Co. SC on the Pee Dee River. About the year 1777, Perkins helped Sweat run away with Frances Smith, the wife of J.B. Taylor. Sweat moved from SC to Tenn, to NC to Big Black River, Miss. And arrived in LA in 1804.

Fayetteville, North Carolina --- Dec. 2, 1845 -- Extreme Old Age -- A writer in the Highland Messenger says he had just visited Spencer Bolton, a resident of Buncombe county, who is now almost one hundred and ten years of age! He was born (1735) on Big Pee Dee River, in South Carolina, and is still sound in mind and body. He was in several skirmishes under Marion in the Rebolutionary war. Has been for 65 years a member of the Methodist Church. Health generally good. In early life, principal diet bread, rice, potatoes, and milk; slept on straw beds; generally up before day-light; and much accustomed to bathe in cold water. To the influence of these habits he ascribes his long life. Spencer Bolton is father of Solomon Bolton who was identified as a Portuguese/Melungeon in 1874 court case.

These are the families first found on Chippoakes Creek, as they spread out into the Carolinas, Kentucky, Tennessee etc.