He starts out with the research of Edward Price from 1950 - 60+ years ago which is based on "available records and census shedules at that time." He gathers from these census records of what 1880, that all these small pockets of brown people, remnant Indians, were not related.

Without giving the genealogies of these families Price, and now Goins, wants us to believe they were not related. The Perkins family of the Pee Dee River were called Portuguese and Melungeon when they went to Hamilton Co,. Tennessee and when they went to Kentucky they were part of the Magoffin County Indians, and when they went to Mississippi and Louisiana they were called Redbones.  Ditto the Gibson, Chavis, Oxendine, Shoemakes, Collins, etc. And then he writes; "Pedee River clans in SC, were called the Mestizos, Brass Ankles, etc," well, that may be true but what were the 'clans' from Virginia and North Carolina called?  Not Melungeons, apparently they weren't called anything until they got to Eastern Tennessee and were joined by the Melungeons from South Carolina.

In the paper co-authored by Jack Goins last year we have from the Table title MELUNGEON HERITAGE;

Now in the North Carolina 1915 Superior Court Case of Goins families vs the Board of Trustees Indian School Pembroke McMillan was asked; "Do these people here call themselves Croatans?"  He answered, "No sir they call themselves Malungeans."

Now why would these people in Robeson County just decide to start calling themselves Malungeons, a supposedly derogatory term.
Jack Goins, Penny Ferguson and I were researching the 'Celebrated Melungeon Case' in 2005 when we discovered the transcripts from the case. Until then it was not known if these people in Hamilton County had been known as Melungeons in the 1850s or if they were simply dubbed Melungeons after the fact. The trial proved that the Boltons, Shoemake, Perkins, Goins, etc., were indeed known as Portuguese people called Melungeons and they came from the Pee Dee River, not Louisa County.

Jack Goins realized this was a problem immediately, which I discussed in this earlier blog.  He knew these people came from the Pee Dee River as they are on the 1794 petition there, he knew their neighbors called them Melungeons many years before the trial, he knew they were known as Portuguese, he knew this information changed the old arguments of a few families coming from Louisa County, Virginia to Orange County, North Carolina as he had outlined in his book so many years ago.  And he knew it was a problem.

Apparently Jack Goins is still wrestling with that today, still trying to figure out a way to *crop* them Pee Dee River families out of the picture, the families he calls 'my imaginary Melungeons' even though their names are listed in his Core Melungeon Project.

So in his first blog what does he cover? The Pee Dee Melungeons. Although I personally informed Jack before his second book was published that it is a well established fact that George Gibson, son of Gilbert Gibson married Susannah and lived and died in Louisa County as proven by court records, yet Jack Goins still wrote in his book on page 66;


1727  John Gibson, who received a grant for 328 acres on the south side of the Roanoke joining John Lowe, Jackson, and the swamp on 1 December 1727-Northampton County, NC


"On 25 July 1767 as a leader of the Regulators, Gideon was involved in a skirmish with a constables party near Marr's Bluff on the Pedee River . The incident brought matters between the Governor and the Regulators to a head.....

.....These Gibson's originated in Louisa County, Virginia. Descendants of Gideon Y-DNA was R1b1b2 and matched the Newman Ridge Melungeon Shep “Buck” Gibsons on 29 of 30 markers, which proves they share a common ancestor." 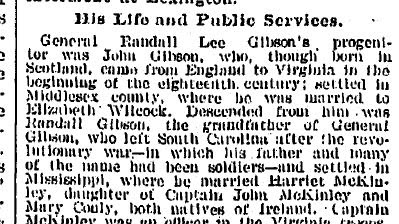 While the Pee Dee Gibson's DNA does indeed match the Gibsons of Louisa County it is not known how they were related. It is likely the lines go back to Colonial times in Charles City County, Virginia when the "Indian Jane Gibson" was born in 1640. Court documents show this Gibson family in Charles City County were known as Indians.

Gibby Gibson, the father of Gilbert Gibson was of 'Westover, Charles City County' and left a will naming his children. Two of his daughters removed to Bertie County, North Carolina and later was found living on the lands of the Indian trader William Eaton at the same time it was reported there were Saponi Indians living on his lands.