Instead of researching it seems these 'internet bloggers' are copy and pasting things they find on the internet instead of doing real research.

First it has been published repeatedly that Will Allen lost her clerkship because of her articles about the Melungeons.  That is false.

Her first two articles on the Melungeons were published August 31st and September 1st of  1890.

Clearly this article published in February of 1889, almost 18 months before she went to Newmans Ridge or published her articles. 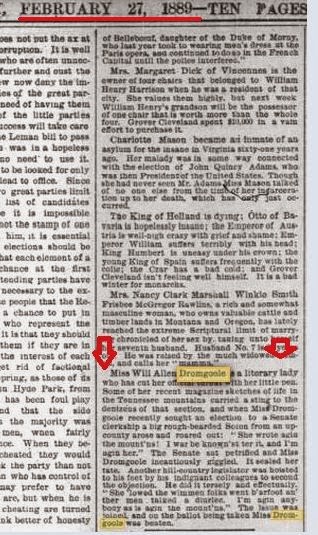 Dromgoole has been called 'a crazy woman' who went to Newmans Ridge and wrote about the Melungeons to make a name for herself but early newspaper articles clearly show she was a recognized author long before she wrote of the Melungeons. Some people have written that she never even went to Newmans Ridge but again early newspaper accounts show that is false.

Her account of the Melungeons, it is said, is based on hearsay. That is false. Dromgoole arrived in Hancock County with her sketch artist and stayed a month, in the homes of Callaway Collins and the Goins family.  There is an extensive story on the Collins family written in TWO TALES, many of these articles can be found on my website and I will post links at the bottom, they have been there probably at least five years.  Why anyone can claim 'they have looked for this information' and not found it is a mystery in itself.

What Dromgoole wrote in her articles on the Melungeons can be backed up by others who followed her to the ridge and wrote much the same things as Dromgoole, it has also been backed up by records as well as DNA.

And here is the worst misrepresentation of Dromgoole's work on the internet. This photo has been published in the Melungeon article at Wikipedia, I have tried in vain to get someone to post the REAL picture.  Why has the identification of  a "Typical Melungeon" been altered to hide the fact it is Calloway Collins whose Cherokee ancestor was old Jordan Collins, son of Benjamin Collins?

This is the sketch that floats around the internet 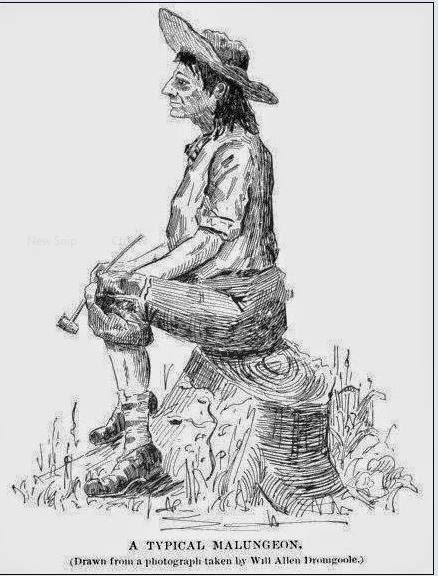 This is the sketch as it originally appeared in the newspaper 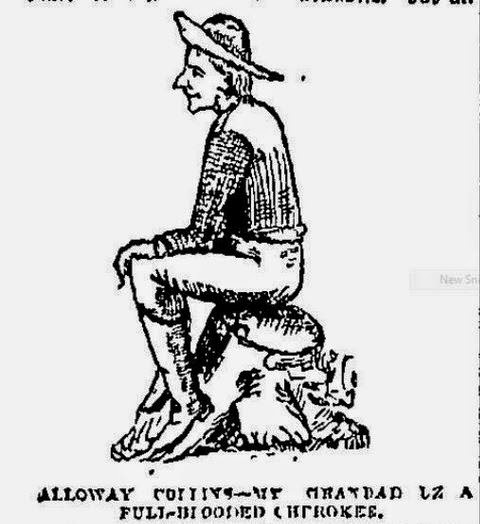 Why do people want to erase the Indian heritage of the Melungeons?  Why do they insist on making mysteries where there are none?

Contrary to the research of some bloggers there is no mystery to this photo. It was published along with other sketches in the "Morning Oregonian, (Portland, OR) Tuesday, October 14, 1890; pg. 3" as well as several other newspapers.

A recent blogger apparently trying to make a story where there is none wrote he was surprised there was no name to go with the picture (see above) and he didn't know who made the sketch.  This is sad.

In Dromgoole's second article in 1890 A STRANGE LAND  she writes;  "Mr. Thomas Sharpe, of Nashville, made an excellent sketch of this teacher while he was busy with his class and unconcious that he was “being tuk fur a pictur.”

This is the article as it was printed in 1890.  I apologize for it being a little choppy but it was a large article. 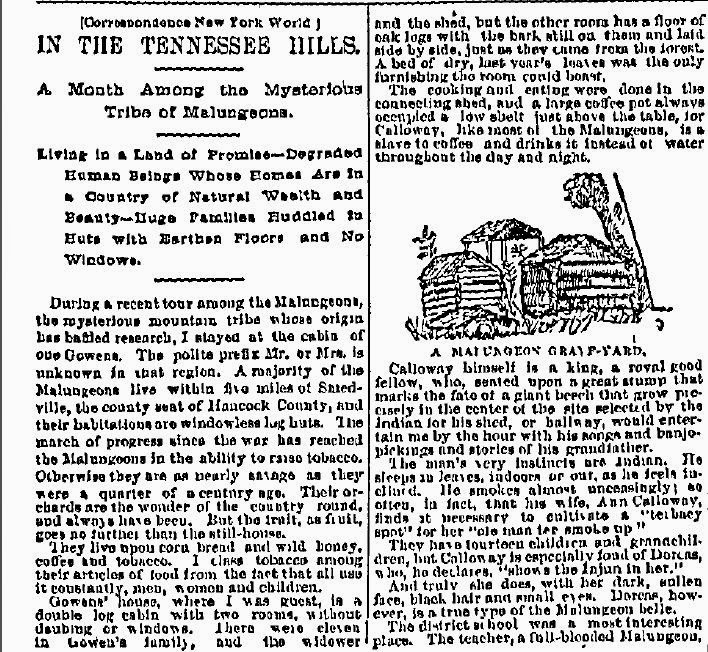 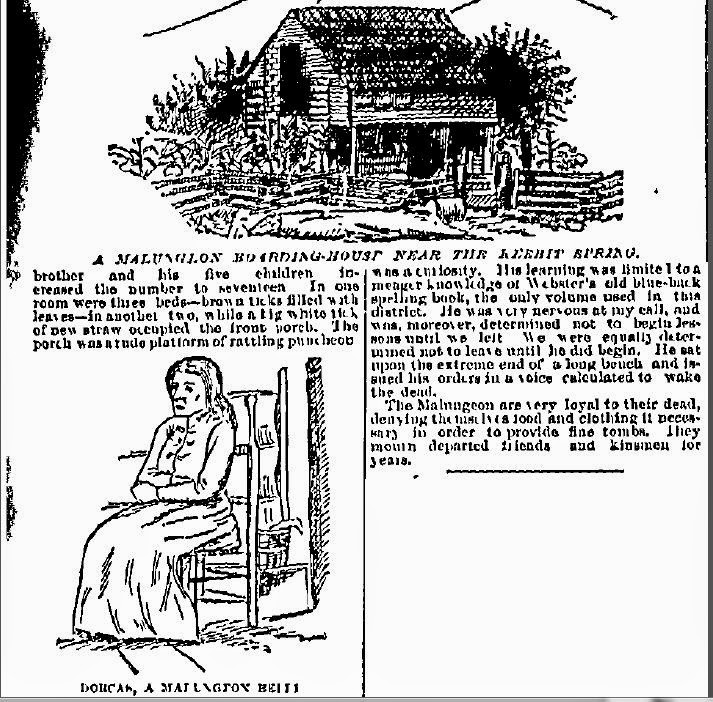 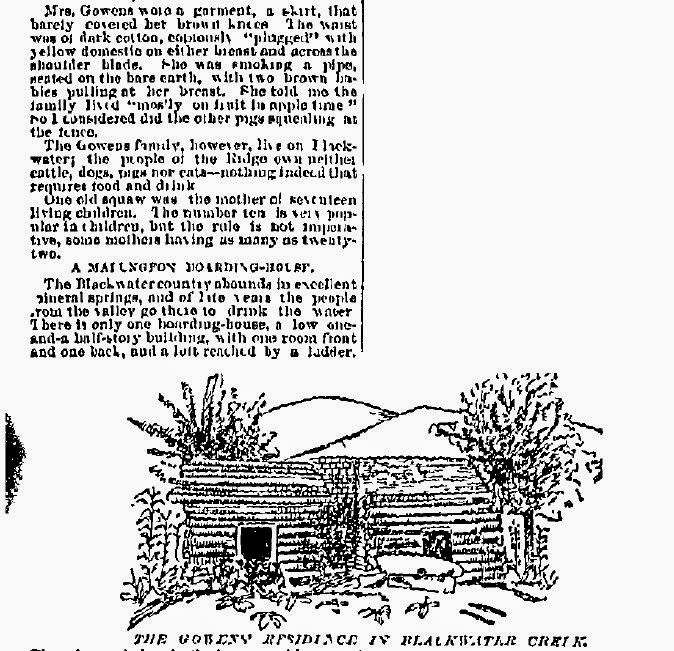 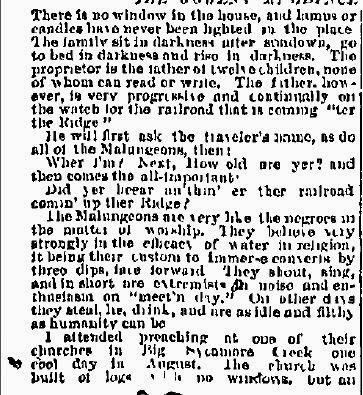 There has been much written about Dromgoole over the years, most of it not very flattering, untrue, etc.  We owed a great debt of gratitude for her making her way up the ridge and telling us the little history we know of the Melungeons which can be found at the link
WILL ALLEN DROMGOOLE
at April 24, 2015 2 comments: